We arrived at the camp on Friday 22nd morning. The trip was by flight from Brussels to Kiev and then Kiev to Lviv on 21st July. We had to stay in Lviv one night and a student of Sabum Oleg took us from Lviv to the camp on Friday morning (4 hours road trip). Lviv is a pretty city and it was worth staying one night to walk around. 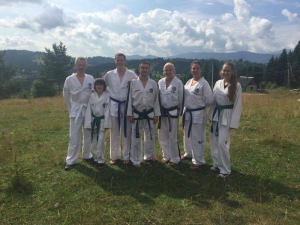 Five people from ITF-Belgium participated to this camp, Nicolas Taylor, Hortz,  Adam and Laura Nickels (Samjok-O), and me (student of ITF Brussels). All together we were around 60, mostly teenagers, and there were 9 world champions. When we arrived we had free time to settle in our rooms and then we had lunch, after which Sabum Oleg explained how the trainings were going to take place. Even though we were not supposed to have any training on Friday, he organized a little “warm up” which was great to get to know each other and everybody was keen on the idea to put on the dobok and start right away. It seemed like a very high level training camp from the beginning and I was really happy to learn and train for a week with so many skilled students.

There were three groups, the first group was for black belts with many experiences in international competitions, the third was for kids and the second was for the rest of the participants. As this latter was a bit overcrowded, belts from white to blue were transferred to the third group, though Sabum Oleg was very understanding and let few people train both in group 2 and 3.

The training days started at 7:30 am with a run in the mountains (around 5km), which was both challenging and refreshing. For people who were not used to altitude if was a bit difficult to breath and climb such slope but we were cheering each other to keep going and it was really a fun though intense moment. After running we did a lot of stretching, before working out with abs, squats, push ups and planks. Stretching was an essential part of our training, as Sabum Oleg said “splits must be your favorite exercise in Taekwon-Do”. During that session we had to be proactive and really organized as there was no particular instruction. It was really interesting to be able to watch and learn from other students as well as to be responsible for yourself to improve both your flexibility and strength.

We then had breakfast at 9:00 am and free time until 11:00 am when the second training started (even though we could start at 10:30 am to do some crossfit and stretching), more focused on technical skills for sparring. During that training there was no specific instruction either, students had to get together to train with pads and/or elastics. It was maybe complicated at first as people already had their sparring/training partners, and not everybody spoke English, but in the end it was a perfect way to watch, learn and push yourself. Fortunately, I could train with Ukrainians which was excellent to stretch the limits and benefit from each one’s experience. We then had lunch at 2:00 pm and free time until 4:00 pm for one hour of sparring training with Sabum Oleg. These were really awesome sessions, very hard technically and physically; I gained a lot of confidence and new skills which I will definitely improve during personal trainings at home. Dinner was around 7:30 pm in the “restaurant-cabin”; food was very diverse and most of it was local dish which was cool as a way to discover a bit Ukrainian culture. If needed there were shops and a restaurant with wifi in front of the camp (for water and additional foods /snacks).

Those are the trainings outline, but it seems important to mention that you could train pretty much whenever you wanted, as long as you respected other people’s trainings naturally. Many people were hanging out at the dojang during free time to work out more specifically on a technic, to practice tuls or just to observe and take notes during other groups sessions. It was also possible to train on the rest day which I personally greatly appreciated. Most pieces of advice were actually given during unofficial trainings which I interpret it as an incentive to train whenever possible, wherever possible and to always be ready to learn. To conclude it was really amazing to be able to train with ITF practioners from all over Europe, and to be around so many past, current and future champions. It was a bit complicated with the language and cultural barriers, and many people came as groups and/or knew each other already which didn’t make it easy to integrate, but what doesn’t kill you makes you stronger, and in the end true friendships were built despite all the difficulties. Also, most people were training in Ukraine’s camp in view of the World Cup in Budapest and it was wonderful to share and work together toward the same goal. It was also very interesting to find out more about the competitors challenges.

Ukraine is such a beautiful country and it’s worth going there just to discover the region and culture. I must say I was a bit impressed around Katya and Oleg at first, but they are so kind and open-minded persons, I realized I could just relax and train without fear of being judged. Somehow the way I grasped sparring did change a lot. Sparring only gets better through sparring, and as Sabum Oleg put it “you can be champions on a target and loose a fight”. So protections on!!