The weekend of November 26th-27th ITF France is organizing an IIC with the ITF Technical Committee in Vincennnes, Paris at the sports complex of INSEP where all the national and Olympic teams of France are training on regular basis. GrandMaster Hector Marano (Argentina) will conduct the lessons together with GrandMaster Lan Ung Kim (Germany) and Master Paul McPhail (New Zealand). 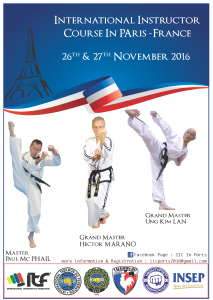 Twice a year ITF-Belgium organizes the Day of Taekwon-Do. The second seminar of 2016 was held in Jambes, Centre Sportif Adeps, Sunday November 6th, with 10 instructors conducting classes for 112 participants, who were divided into groups according to their age and degree. Participants came from all schools affiliated to ITF-Belgium and ITF Luxembourg.

All participants received a certificate.