Gold in Team Sparring at the European Cup 2017! 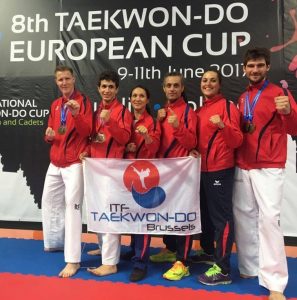 Thibaut, Nicolas and Omar also got a bronze medal in individual sparring in the categories coloured belts -78, -85 and -63 respectevely.

Alice Vrinat and Pablo Pascuzzo also competed in individual sparring. Alice did a good fight in a mixed weight category (+62) where there were another six Polish competitors. It was her first time with lighter competitors. She did well but could not win this time. Pablo competed against Russia (-63). He did a great fight, but the umpires did not see the so many clear points he did and he lost…

Bo Sabum Benito Martínez worked as umpire in the Children and Cadets competition on Friday and at the European Cup on Saturday and Sunday. Sabum Pablo Pascuzzo and myself were coaches, while Leonor Garcia helped us taking pictures and making videos.

We felt a lot of mixed emotions at the European Cup held in Lublin (Poland), which had 379 competitors from 22 countries, 66 clubs from Europe and 6 competition areas. It was a good international experience for our team, and the athletes came back home very motivated!