Participants from Belgium:  Alice and Hana from ITF Brussels and Laura, Adam, Suzanna and Nicolas from Samjok-O. Report written by Nicolas: 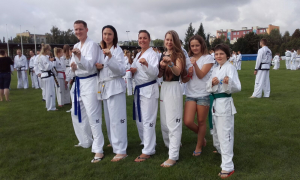 We landed in  Warsaw on Friday 19th August early afternoon. Then transportation to  Biala Podlaska was organized and  we had the opportunity to meet 2 persons from Finland during that time, to whom we spent quite some time altogether during the camp. The camp took place at the sport facilities of the Faculty of Physical Education in Biala Podlaska. It is a huge area that offers several halls and gyms, a swimming pool, running track, etc… We were accommodated in students’ apartments on site. With walking distance, there were shops in case we needed to buy anything such as water.  On the first evening, all participants (around 160) were gathered together and Master Loboda (8th degree) explained the organization of the camp. He also introduced all the foreign countries that were participating to this camp. In addition to Belgium, there were representatives from Belarus, Cyprus, Czech Republic, Finland, France, Norway, Romania, Uzbekistan and Poland. You could feel welcomed.  After that, we were divided in 3 groups based on the belt and age.  Every day, the training started at 7:00 AM with optional yoga course followed by breakfast. Yoga lessons were given by Boosabum  Andrzej Kozlowski (precursor of Taekwon-Do in Poland) and proved to be a very good way to start your day.

After, depending the day and your group, you had some free time before the morning training (at 9:00 AM or 10:30 AM.) Then lunch and free time till 3:30 PM or 5:00 PM for the second Taekwon-Do training. Those sessions were mainly given by Master Jedut (8th degree) or Sabum Suszka (6th degree) but a few were given as well by Robert Jasinski (6th degree). It was focused either on sparring or on pattern.  Dinner was at 6:30 PM. Afterwards you could rest if you wanted to but you also  had the possibility to train your patterns by yourself or  have some consultation to correct your techniques mainly with Master Jedut or Sabum Suszka. Personally, as Master Jedut told me during the Winter Camp, I had the opportunity to train with him twice for 15-20 minutes some of my basic techniques. It’s an amazing opportunity where you learn a lot. Consultation often lasted later than 10:00 PM.    For black belts, also during the evening, there was a special Master Class lessons to repeat black belt patterns. As coloured belt, it was also nice to watch them perform those.  In addition, we had the possibility to go to the swimming pool twice a day and on some evenings to use the sauna.  All classes were of a very high quality and with different exercises or techniques than the ones in Belgium and it was good as well to train with new partners. It was nice as well to meet again people from the previous Winter Camp and I’ve been discussing with some of them the possibility to meet again in the next Winter Camp (from 23rd to 29th of January 2017).  I would recommend this camp as it’s really complete : sparring, patterns, individual consultation and even self-defence (except this year unfortunately.) The organization is very good, no logistic issues. We even got a lunch bag before leaving the camp to join the airport. In addition, you meet many new nice people who is sharing the same passion.  For information, next year, this camp will be organized again in July, from 7th till 16th